Have you ever overtightened a bolt and ruined the threads inside? How about ruining the threads on a bolt? Need to make threads in a newly drilled hole? Well, Taps and Dies are the tools to solve these issues and more!

What Are Taps & Dies?

A tap is a tool that you use to cut a thread into the material surrounding a hole, while a die is used for cutting threads into a rod that will mate with that hole. Dies are also used to cut new threads on new bolts, or repair threads on existing screws and bolts. There are several different types of taps and dies: 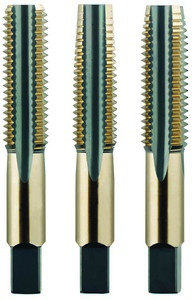 A tap is a tool that you use to cut a thread into the material surrounding a hole. These taps can be used in different tools but the most common way to use a Tap is by hand, also known as hand taps. There are three common variants of hand taps:

•         Taper taps have the longest tapered end compared to the others. This makes starting a new tap easier but with the tapered end, you will not be able to make complete threads very deep in your cut.

•         Plug taps are often used in through holes, or where there is adequate room at the bottom in blind holes. They are not as easy to start new threads as taper taps are but are a good middle ground if you have the patience and need more complete tread depth compared to the tapered tap.

•         Bottom taps deepen the cuts made by taper and plug taps to get the treads cut as deep as possible into a blind hole. These taps have little to no taper meaning that it is extremely if not impossible to start a new thread. 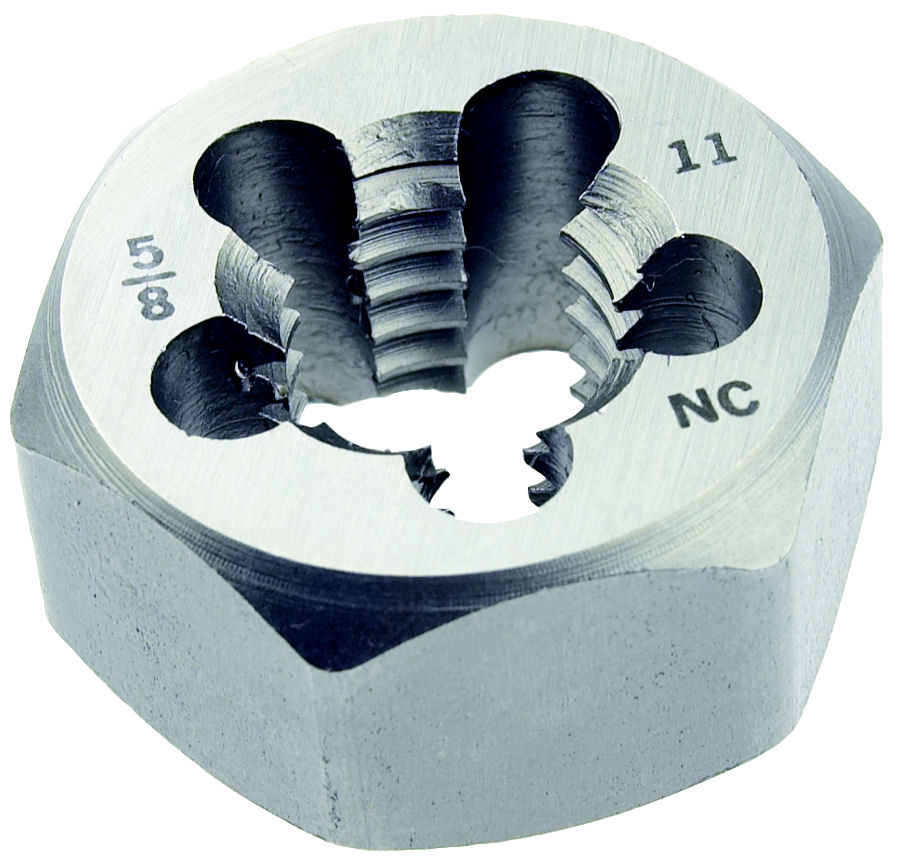 •         Round dies are to be used with a T handle found in most tap and die kits. These dies are generally used for cutting new threads whereas the hex dies are used to chase existing threads.

•         Hex die nuts dies don’t require something to hold them down like round dies and can be used with hand tools such as wrenches and sockets.

How To Use A Threading Die

There are three basic steps for making proper use of a die:

Begin by determining the threads per inch. A gauge system with several different pins can be used to determine the threads per inch (TPI). Once this value is known, choose the corresponding die. A tapered die will indicate which side to begin with. A special wrench holds and guides the die.

When creating new threads on a worn-out bolt, insert the bolt into a vice to secure it while the wrench is turned. Use some oil to lubricate the bolt, as metal cutting metal will produce heat. Placing the die over the bolt horizontally, begin turning the wrench. The die will catch on the existing threads. Reverse the direction every couple of turns so that you can clear the threads. This will allow the die to cut better. Apply oil periodically as well. Continue turning until the wrench passes the top of the die.

If turning a steel rod into a bolt, you must use a bolt with a bevelled end. You may also chamfer the end of a flat-ended rod to create a bevel. Lubricate the bolt often while making slow turns. This may take some time and patience to get the results you desire.

How to use A Tap

Choose the appropriate size to match the bolt or hole that you wish to thread. Insert the tap into the special wrench and tighten it. Place the cutting end of the tap over the hole and begin turning. Use cutting oil to keep the tap lubricated. As with the die, reverse direction occasionally to help prevent chips from jamming the die.

Using taps and dies is not terribly difficult. Remember to go slowly and carefully, as errors typically arise from going too fast or being too forceful if a tap or die binds up. Ensure that you get taps and dies started correctly and remember to reverse periodically to help make clean cuts. Doing this will help you be sure that the threads you have cut work properly.